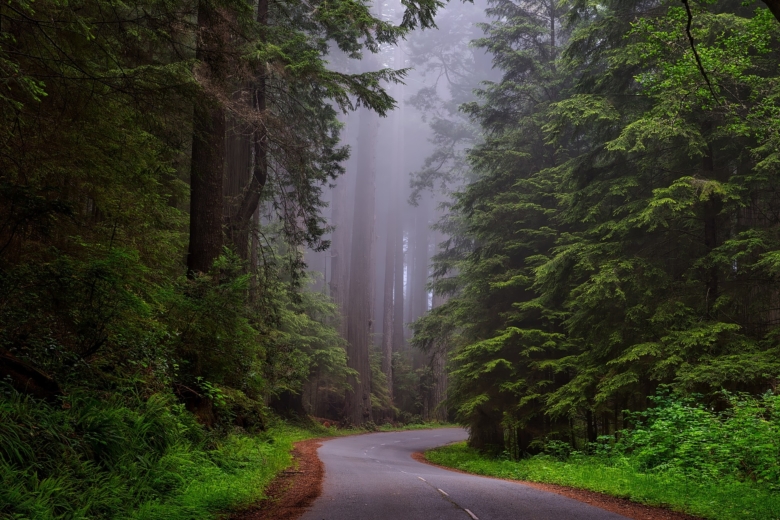 The world felt a little hollow and empty as I crossed the road to go to work and watched John’s truck disappear down the highway, but my job and the happy little crew of migrant workers quickly lifted my spirit, we had some trucks to load.

The days at the warehouse were a whirlwind of work and fun. A short, slender red haired guy and a few of the other workers were steadily trying to draw me in to be one of their running mates; filling my head with stories of their past adventures and plans for the future. Of course, I listened and considered their offers but the prospects didn’t really appeal to me.

About three days into the job, on my lunch break I went to the office to talk to my no nonsense boss about an advance on my pay to pay my motel bill. He was immediately obliging and began to stop and talk with me at different times during the work day. His name was Bob, he was from North Carolina and I think he began to feel a little kinship with my southern accent and demeanor. On Friday he offered me extra work on the week end and I quickly accepted; I didn’t want to spend the whole weekend drinking and running around with my migrant friends. I wanted to build up a nice little bank roll before I hit the road again.

Bob and I hit it off really well, both of us being from the south, and he and his wife invited me out to dinner one night before I left the job for the rest of my adventure. During dinner, he revealed that this was his first job out of college and he was happy to have it, but that it got a little lonely out here in potato country and being this far from North Carolina was hard, especially for his wife. They were very nice people and I thought they needed to be somewhere closer to home. I’m sure all my talk about freedom and reassessment of my life didn’t help them deal any better with their loneliness. If Bob wasn’t already looking for a new job I’m sure it wouldn’t be long before he started.

I found out that California was a difficult place to hitch hike and try to see any of the big named places you might want to check out, slow going. The only memorable things I remember about California was the glorious country in the north, spending all night in a truck stop, being shocked by the damage still visible from California’s last big earth quake and a great trucker named Chris that gave me a ride all the way to his home in San Diego. I stayed with Chris a couple of days and then headed west with directions to El Rito New Mexico where his best friend and his wife had bought a place where they could return to the land —— no electricity, no plumbing and growing everything you eat. Chris was considering moving out there himself and he painted such great pictures of the place and that way of life that I thought, I need to see this place. In those days lots of people talked about returning to the land.

Before I left California I called Connie; I hadn’t talked to her or hardly thought of her since she’d let me out beside Highway 20, west of Tallahassee. This trip was very serious business for me and somehow I felt I’d done what I needed to do. When I got her on the phone I told her that I’d really missed her the last couple of days and briefly told her what I’d been doing and how well things had gone. I don’t know why I did it, I hadn’t planned to do it, but then I ask if I come get you, do you want to come back out here with me? Without hesitation, she said, “Yes”. I said, “OK, I’ve one more stop to make and then I’ll head straight for Tallahassee”.

Between San Diego and El Rito, New Mexico, I met some very interesting fellow travelers. The first was two very young French guys from Montreal Canada, both were about 18. They had thumbed all over the US and were headed for South America, they amazed me. They were probably the most charming, charismatic kids I’d ever met. We ended up on the same ride right out of San Diego, and Everyone who picked us up got a show; stories and jokes galore. I hated to part with them but in New Mexico, I had to go north on Interstate 25.

My second memorable encounter was with a very dark, scary individual; even for a big, strong capable guy like me. He kept trying to lure and insinuate me into, shall I say unappealing activities, with him that really brought me down off the high I’d been on. I could see that one of us might end up getting hurt with some of the kinks in the conversation; his expressions and mannerisms were getting more aggressive as we drove. He was a large, thick, powerful man but I was guessing that he had no idea of the power he would confront in me. However, maybe he was reading my confidence better than I thought. He was clearly a dangerous man and maybe he decided I was a dangerous man too. Thankfully, it was an unspoken standoff and I was very relieved when we parted company in Albuquerque.