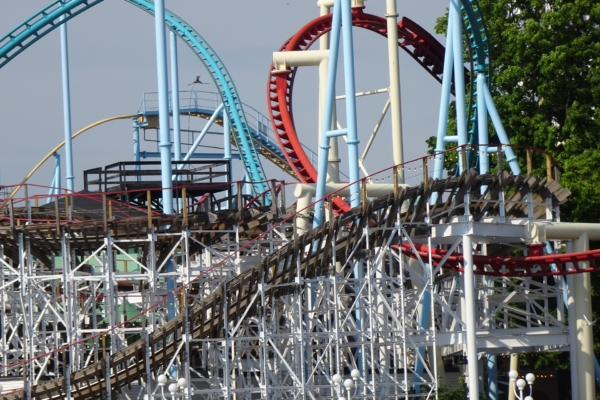 The carnival was teaming around the fantastic roller coaster, one of the largest and most frightening in the world. The cars came flying, screaming down from the soaring height of four hundred feet in the air at a hundred miles per hour; just the sight of it made me silently gasp as I was violently jolted by my twelve-year-old son who was so excited and agitated that he was about to take flight himself.

The loud confusing din around the ticket booth and entrance to the roller coaster had my stomach retracting to the back of my body cavity as Jay continued his relentless insistence that I ride this behemoth with him. I don’t know, to this day, why I finally caved and agreed to ride that damn monster, but it made Jay ecstatic; some mysterious jolt of courage came up my spine to my helpless brain and I said yes.

Jay and I were seeing each other for the first time in two years; I was finally settled in one place and my ex, and I made this arrangement for Jay and me to have a long-overdue visit. Little did I appreciate that this whole thing was an unavoidable trap set by unavoidable circumstances, Jay and I were corned by life, by blood, we were father and son; we didn’t know for sure what was coming next. I felt so guilty but yet so happy and nervous to have him come visit me that I had only one really clear thought; I was determined that we would have a great time.

I handed the man our tickets as I stumbled into the car, sat down, and saw the big restraining bar come over my head and be locked tight across my body. I turned and looked at Jay; he was lit up like a Christmas tree.

The action started quickly after we reached the top of the first awesome tower. Vrooooomm, we dropped at ninety miles an hour, my consciousness was a blur of fear, coming and going in and out as the terror in my brain and the screams coming from my mouth would jolt me back into awareness. In the space of three and a half minutes, I was yanked around, upside down, my awareness, my senses twisted like a pretzel, screaming like a hysterical mad man certain that my death was imminently, insanely zooming in at warp speed to destroy me.

I felt like a gutted fish as Jay held my hand and led me off the exit platform. He was ecstatic, describing the whole experience as if I hadn’t been there on it with him; he said my face was like a big, flat frying pan with a huge wide-open mouth in the middle and that I squealed and screamed every time our little car changed directions. He howled with laughter, pointing at me and then punching me in the belly.

Jay couldn’t get enough of this craziness, and he started in on me to let’s ride the monster again and challenged me with being afraid. I tried to drag him away to get some cotton candy or anything to eat but he would not relent, and I felt that mysterious surge of courage stiffening my spine again, I took the bait — we were back on the brain-destroying monster again and the result was the same.

All the way home, Jay punched and ridiculed me with whatever he could think of; mocking my screams of fear as we hurdled down inside-out circles and twisting loops. He’d twist his face, stick out his tongue, and howl with delight at what a little girl I’d been.

Jay’s visit felt like a little soldier on a mission, a little sneak attack to bring and unsuspecting target to their knees and I breathed a great sigh of relief after getting him on the plane home; however, when I called my ex to confirm our son was on the way home, the real hammer fell on my head.

I made the mistake of mentioning Jay’s, at some moments, strange behavior to her and she let me have it with both barrels. “What about your strange behaviors?” She lit in on me and recounted every incident, real or imagined where I had failed my son, most of them were true, some imagine; when my business failed and I’d lost everything; when our marriage failed and I turned to alcohol and drugs; when my family and friends began to look at me with pity I couldn’t stand it, I cut and run, leaving Jay when he was just two and a half.

As she continued, she got into Jay’s behavioral problems and his anger problems; breaking things and being defiant. She got louder and angrier and my wife, who was standing right beside me, could hear the whole angry conversation, just shook her head and went back to the kitchen. I could hear my ex’s pain and I knew she was right about a lot she said but on the other hand, she had owned, practically, none of the causes for our failed marriage. I realized back then I had to put geographical distance between me and the catastrophe of my marriage and what my life had become if I was ever going to be able to get on with any life at all.

I knew we would always be scared people; my ex, my son, and I, but scared people are strong people if they, with the help of their scars, learn to understand and love themselves and others, we just have to keep on trying.