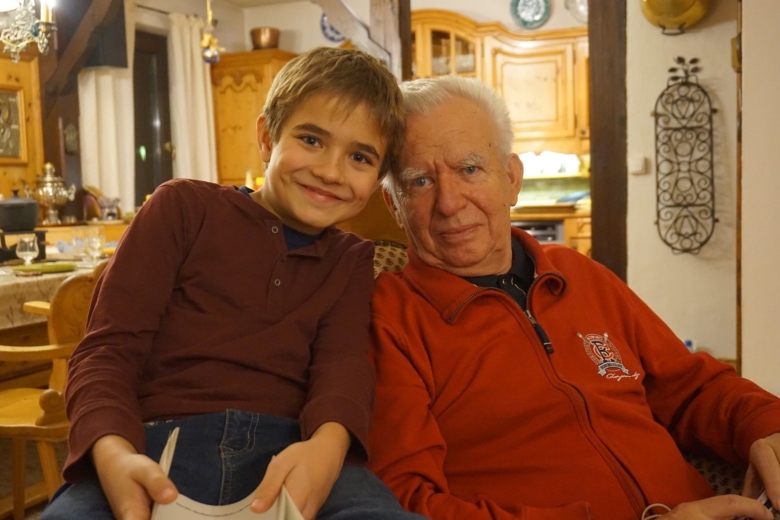 Little Joe was very tired from a big day at school, visiting with his Grandpa, Big Joe, next door, doing his chores, chasing around the yard with Ginger, his dog, and fighting with his older sister who seemed to be upset all the time. He was just about to fall asleep when a loud, shrill screech from his sister, jolted him, she was fighting with the parents again. There was another minute or so of high pitched, angry words and sounds followed by a slammed door, then silence. Little Joe pulled his pillow up tight in his arms and fell back asleep.

The weekend came and Little Joe thought he was in trouble because his parents sat him down with that look on their faces that he and his sister, Jewel, knew so well. They told him not to worry, he wasn’t in trouble, they just needed to talk to him about talking about God so much at school and here at home too. He was surprised and took a quick breath. His mother said his teacher had talked to her about how he seemed to see God everywhere and in everything and shared much too much of his thoughts with his classmates. He listened obediently and understood; remembering the looks on some of the kid’s faces. His mother said, “Little Joe, there’s a time and a place for God and you shouldn’t press your thoughts on others too much.” He just looked at his parents and remembered his Grandpa saying that his parents, like most people, think they should have God on a retainer, meaning, they just call on God when they need Him.

Later, Little Joe was telling Big Joe what had happened and said he thought he understood. Big Joe listened and then said, “Dear boy, you’re sharing what God has put in your heart with people you love and that is absolutely right and wonderful, you just have to get smarter about how and when you say things and who you say them to; God will help you understand all that, He will put that in your brain. God will help you find the right words in your heart for your mouth, just keep your mind on Him and He will use your life, your work, and your love to do divine things, some may be big, many will be small. You are His instrument, son; Stay strong in your faith and you will make a strong man. He has always been there for me, little Joe. Praise be to God.

Little Joe’s family loved Grandpa but for everyone but Little Joe, Grandpa was too slow and didn’t talk about much of anything but stories from way back when he was younger. To little Joe, Grandpa could have been one of the prophets from the Bible; everything he said was indelibly printed on Little Joe’s brain; however, it wasn’t all about what his Grandpa said it was more about the love, the glow, and joy that came from his eyes, the touch of his hands and his hugs. Grandpa was like a big crystal pitcher of God’s love being poured into the pure precious vessel of his grandson.

A few years later, the family was all together on a Sunday for Grandpa’s birthday and his favorite meal of Southern Fried Chicken, mashed potatoes, and fried okra, Little Joe was home from his first year as a grunt with one of the largest filmmakers east of the Mississippi. His ambition was to make films of Grandpa stories and make sure none of the love was left out of them…………. Around mid-afternoon, Grandpa excused himself for a nap; he never woke up, it was his time.

The family mourned deeply but Little Joe was prepared. He knew where Grandpa went, and he was going back to work with his plan to rise to the top of a film company and have the first of his favorite stories of Grandpa’s released in five to ten years. On the drive back to Atlanta he mulled over his business plans for the future and also when he would have a son and a grandson of his own and share the story of Big Joe; told in just the right way with just the right words from God.