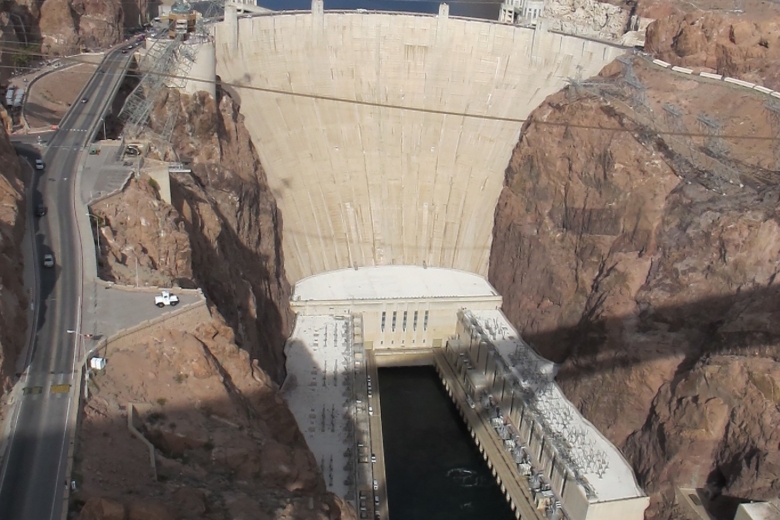 My life has had and continues to have distinctive phases. In my late twenties, all my efforts of the first twenty-seven years of my life came tumbling down on me like a ton of bricks, so I harkened to the famous call, “Go west young man go west”; I was just a hundred years too late, but to me, it sounded like an ageless admonition. So, I mounted a mad dash from my troubles in Tampa, FL out into the west, not toward any one place, just somewhere, everywhere west and as good fortune would have it I found a long lost cousin in Las Vegas.

Good fortune continued to smile on me helping me land a job in a service station out on the strip and in just a couple of weeks my cousin’s influence with his employer, the Gray Line Sightseeing and Tour company, helped me land a job as a tour guide. I was smiling, things were working out.

My assignments varied from driving limo off the airport, hauling baggage to and from the hotels, taking groups to the big shows, and the dam run. The dam run was loading 45 people on a big Greyhound-type bus and driving them to Hoover dam which is only about 40 miles from Vegas. My training for the whole job was pretty scant, a guy had quit suddenly and they need me to go to work ASAP. So, my training began with the instruction to be nice and helpful to all the people. Next, I was taken out into the desert, with a big bus, and schooled on how to drive this behemoth; mostly it was about how to master the timing of the bus’s big transmission, learn how to double clutch it, and how to back the bus up using only mirrors. I couldn’t turn around and look behind me. The trainer, then, took me into town and we wheeled around Vegas for a while. PRESTO! I was trained.

The run to the dam was a regular event, but you could choose not to do it if you didn’t want to. About two weeks into the job I felt brave enough to take a dam run even though I’d been told it could be very difficult. I was not prepared for the reality.

The group consisted of three buses, about 45 people per bus. We stopped at Boulder city for a snack and to show everyone a film about what they were going to see. During the stop, one of the other drivers kept going over the keys to traveling the very steep, little, seven-mile-long road from where we were stopped straight down into Black Canyon where the Hoover dam blocks the Colorado river to form Lake Mead. The guy kept saying, “Now when you hit that last turn and head straight down into Black Canyon you need to be sure you don’t ride your air brakes or you’ll burn them up. Then it’s Katy bar the door.” He grinned tragically. Again, in two minutes, for about the twentieth time He said, “You have to gear down when the bus starts speeding up, double-clutch it, pop that gear, slow her down.” Well, there’s a hell of a difference between somebody telling you how to do it and actually doing it.

We all loaded up and I was told by the senior driver to go first. I was the lead bus, only later would I understand why. When I made the last turn that the guy warned me about, the downhill grade looked like the high point of a killer roller coaster. I’m sure I must have sucked half the oxygen out of that bus, and I braced myself, stiff as a board, ready to double clutch and downshift that big transmission. Oh hell, I missed the first downshift; I missed it again, and again, and again, and again. Well, you can’t shove a wet noodle up a wildcat’s butt, but that’s what I felt like I was trying to do as I was grinding the gears, tapping the air brakes, and sailing down the face of that canyon on a narrow ribbon of a road.

I looked down into the canyon to my right and I would have sworn it was 5,000 feet deep. I looked up the sheer face of the canyon wall on my left but couldn’t see the top. I couldn’t get the gear shift to go into any gear, every time I double-clutched and pushed I’d just hear grinding, so I kept hitting and tapping my brakes to slow that big box down. I felt like I had constricted down to at least half my size, that every cell in me was cringing, contracting, preparing for death. In my state of terror, I glanced at my big overhead mirror expecting to see 45 terrified people, but unbelievably, they were calm and serene, having no idea what incompetent hands they were in, obviously oblivious to their impending death. The trip down into the canyon couldn’t have taken more than 15 minutes, but for me, it was a lifetime.

Somehow God and I got that big bus down to the dam, I concluded it was only about one percent me. When I stopped the bus I was supposed to get out first, stand by the door, and assist anyone who needed it. I could not get out of my seat; I was so exhausted. My heart and lungs were using up every bit of energy left in my body just to keep me alive. I just sat there for a while, resting and thanking God. For the next few months that I worked for the company, I never volunteered for another dam run. I never even considered it. I never told anyone on the job what I had experienced and I stayed on the flat streets of Las Vegas.