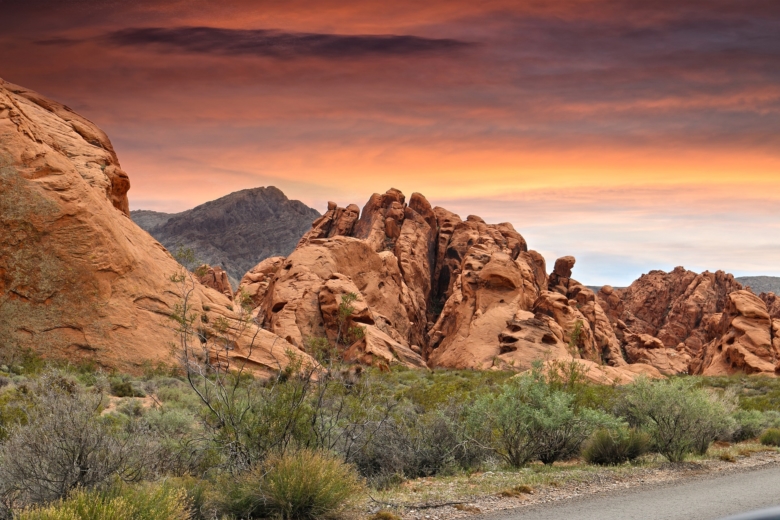 When I reached the other side of the broad interstate highway, I looked back at George who already had his thumb out for a couple of cars that were coming our way. He waved at me and I waved back. Beyond him, it seemed I was looking back down into Arizona and Mexico from a high, high mountain. I turned and looked behind me into an immense valley and another valley beyond it and as far as I could see there was nothing but deep green forest. I was on a high ridge that gave me the feeling of being on top of the world. I felt confident and empowered and in a momentary euphoric daze. For a few seconds, I forgot I had my thumb out and was about to miss a truck that was pulling over for me.

Despite being a good ten years old the truck looked and sounded strong. It was carrying a big load of something covered by a tarp that had faded to pretty well match the faded color of the truck and the hat and shirt that framed the face of the man looking at me as I climbed in the passenger seat. The man was somewhere between sixty and seventy years old, I’m not a good judge of age, but like the truck, he was clearly a strong individual and his tan face and countenance exuded a very pleasant aura of peace and kindness. I settled in and we were off toward Las Vegas.

John Kratsmire was a retired preacher who was spending his time now collecting and reselling antique tools and farm implements. He lived in Texas but had lived for long stretches in Oklahoma and Oregon preaching the gospel. In his retirement, he was scouring Oklahoma and Texas searching for these antiques like his truck was loaded down with and taking them to friends in the antique business in northern Nevada, northern California and southern Oregon. He said he was doing very well with his little enterprise.

I never ask John point blank about his change of occupation at his point in life, but from our conversations from Flagstaff near the southern rim of the Grand Canyon to Klamath Falls, Oregon I got the idea he might be like me; having a crisis in faith or at least some doubts. His conversation wasn’t that of a Christian sage but more like, did I and other younger people know something that He didn’t know; had we somehow become the recipients of knowledge that had only recently been imparted to the world. It was like maybe the investment of his life and time had not yielded what he had expected; his spirit, it seemed, just wasn’t satisfied. It didn’t sound like he expected anything material but some deeper and richer spiritual pay off. Today, I know I could have been confusing my own feelings with what I was guessing his words meant.

Well, at any rate, I was happy that John’s conversation was more like a seeker’s than a teacher; it made for a much better camaraderie as we made our way through Kingman, Boulder City, and Las Vegas. John was as easy to talk to as a bartender and I ended up telling him everything from my adventures when I lived and worked in Las Vegas a few years earlier to the true nature and purpose, as far as I understood it, of this wide open, no destination trip I was on.

John had also spent time in Las Vegas but neither of us could think of one reason or had any desire to stop as we drove through town and out the whole length of the STRIP. We just looked and kept on Truckin’ like we were passing a billboard about a tourist attraction. It was about eleven PM when We picked up highway ninety-five and headed northwest for Tonopah, Carson City and Reno and I don’t think either one of us had given any thought about where we were going to sleep. However, one of Nevada’s wicked sandstorms made the decision for us. We’d only cleared Vegas by an hour or so when it hit us. It was already a dark night and the denseness of the sand storm quickly made travel impossible. Fortunately, we saw a single boulder at least half the size of a football stadium and twice as high right beside the road that was very easy to pull behind and break a good bit of the storm. John slept in the cab of the truck and I crawled under the tarp on the back of the truck and cuddled up with what felt like a big tub. The wind was howling, but I didn’t care.