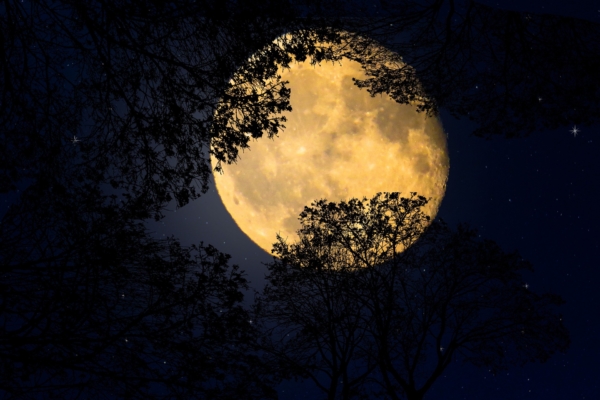 A couple of nights ago, I was taking the trash and the recycle bin out to the curb and looked up at a huge, yellow moon breaking out above the woods to the east of my house; spreading its light high up into the deep black velvety sky and my breath caught fast in my chest.

I went into the house, to the computer, and discovered the powerful Wolf full Moon on this past January 6th, 2023, was upon me and my world. It was like every other fantastic full moon but somehow the energy of this moon was lifting me on a magic carpet of visions, opening my mind to intense memories, pages, and pages of many vivid, raw but rich adventures covering some great periods of my many years of life.

I went back outside and was immediately entranced, swallowed up by the huge, rising mystery of the Wolf Moon as it spurred up a powerful, vivid memory in my mind’s eye of one day in Tallahassee, Florida when I was walking across the big intersection in front of the Florida State Capital building where the Apalachee Parkway dead-ends into Monroe street. The capital building sits high on a hill there and right at the head of that six-lane intersection in a shocking moment, in an amazing, spiritual warrior, awakening, moment a word, a message hit my consciousness with a jolt, and the message was: “I AM”. It hit me again, “I AM”. There I was, a relatively new state worker just going out for lunch, trying to be a good “political Whore” and the universe, God Almighty, flings a powerful, spiritual lightning bolt right through me that almost dropped me to my knees right there in front of the Capitol Building of the State of Florida. I quickly realized I didn’t belong in government — WOW.

WOW, The theme of hills and mountains seemed to be developing and my mind took me, SHAZAM, to that high mountain intersection at Flagstaff, Arizona in the spring of 1972. I had hitch-hiked all the way from Tallahassee to Dallas, Texas, down to El Paso, and on to Tucson, Arizona, up to Phoenix, and Interstate 17 which dead-ended into interstate I-40 at Flagstaff just south of the Grand Canyon. I was headed for Las Vegas, the Rockies, and Oregon on my thumb and the big broad grin on my face.

My ride dropped me at I-40, and I ran across that huge intersection which seemed like a big aircraft runway just in time to catch a retired preacher, John Kratzmeyer, driving an old pick-up truck filled with antique farm implements that he’d scoured Oklahoma and Texas for and was taking them to dealers farther west and on to Oregon. So, off we went to Vegas, Tahoe, and parts west. I think that’s the fastest I ever caught a ride; it usually took a while and sometimes I had to do some walking but at least out there on the road I didn’t have any trash cans or recycle bins to take to the curb.

I kissed the Wolf Moon good night, went inside the house, and dropped into my writing chair of visions with more moon memories from across America and a few from Europe ——- Ah, and there was that 12 acres I bought in Tennessee up on a high hill over the river; where I had a small house and could go look down at the two creeks merging into the river; where I could count deer running in groups around my house and beside the winding road to the main highway on the way to work in the morning; where in the fall and spring the beautiful rolling hills and rich colorful leaves made me feel like I lived in a fabulous, exclusive resort; where I wrote a book of poetry that got rave reviews and the critic said, “the poetry of Mr. Shinholser defines our place in the world and reconciles our hearts with it.

Through all the years I have not forgotten those words, “I AM” nor will I ever forget what they mean to me and every other human being in the world. See you again next year Wolf Moon.