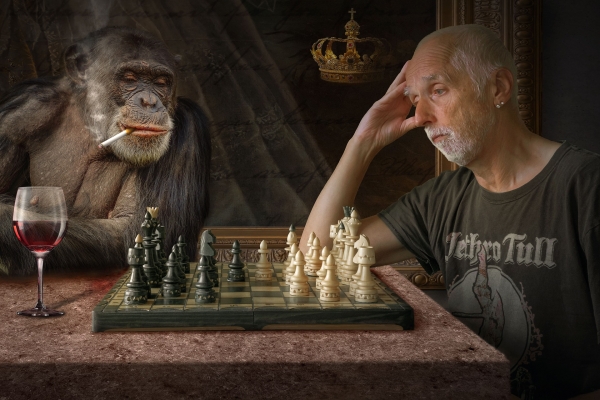 Arthur screeched as he was jolted out of a wild dream. He threw up his monkey paws and fell backward out of the cradle formed where a big limb stuck out from the tree trunk. As usual, his great good fortune saved him; his prehensile tail locked on to the limb suspending him up-side-down and just short of a hot breath and a whisk of wind from the swipe of a huge tiger’s paw. Shocked into full consciousness, he opened his eyes to see his friend, George trying to scramble up the tree trunk through the vines to sink his big claws and teeth into his, supposed, friend Author and have him for lunch.

Time stood still for two seconds as the huge yellow eyes of the tiger and the beady, little, brown eyes of Arthur grasped this raw moment in the jungle — “George!” Arthur screamed in monkey language, “what the hell, don’t you ever take a break?” as he dashed up the tree away from George’s big teeth and hungry belly. George eyed him very keenly as he slid back down the tree to the ground.

“George, I’m very disappointed in you, after millions of years, we should have this thing all worked out but, BAM, you keep scaring the bejeezus out of me trying to chew me up and crack my bones. We’ve got to forgive and forget, that’s why we came home to the trees.’

“Remember, ten million years ago we were both “monkey studs”, up here in the trees living the life; but stupid us we got bored, life was too easy; all the food we could eat, sleep any time we wanted, all the female or male companionship we wanted. So, yes, I had the bright ides to go out on the planes, down by the sea, up on the mountains, one lifetime after another, remember?” George with his ponderous cat stare nodded, yes.

“Remember, Arthur continued, we got so hooked on all the new things we found and all the new stuff to do. We forgot everything but conquering whatever was over the next hill or mountain; one lifetime after another we explore, conquered, and named everything in sight, nothing could stop us.’

We came down from the trees, traded all the food we could eat, all the wonderful trees we could ever enjoy, all the sweet, lady companionship we could ever want, and all the peaceful sleep we ever needed for some crazy damn thing called civilization that almost murdered our souls and falls apart as soon as you get even a little comfortable; like maybe, it was never meant to be.’ George’s expression softened, he dropped down on his front paws, thoughtfully tilted his head to one side and again, nodded, yes.

Author went on, “remember when we lived in Manhattan and I was the CEO of the second-largest insurance company in the world? I thought you’d lost it because you incarnated as a sculking ally cat, living off rats and some dead things, whatever that was. You really got into this loner thing; you’re still doing it now. I tried to get you to come work with me; help me work out a way to insure against all the mishaps and misfortunes of the world and from the look I got I wasn’t sure you weren’t going to eat me then. But that look split my head wide open; you knew. In your crazy way, you knew, and I saw it in your face, and We’ve found our way back home. So, now we’ll just take it slow and the forest will heal everything. Author looked long and hard down at George, picked a big juicy piece of fruit, and wondered what George was thinking…………. Author chewed his fruit and decided, who can tell what a cat’s thinking?”