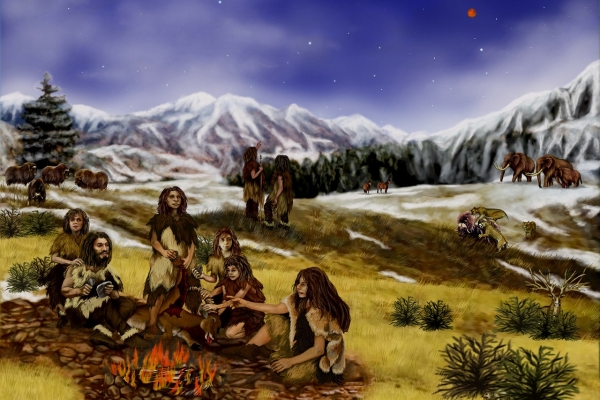 Early one crisp, fall evening about 42,000 years ago —- 40,000 years before Jesus Christ —- in a small cove in the back of a cave somewhere in France the clan’s Shaman had the older clan children gathered near two dim, smokey torches as he revealed an amazing dream that he said he had when he was a young boy; this was a dream meeting the Shaman loved to have for the children where everyone could describe their dreams.

The Shaman had been told, forbidden, by the leader to tell the children certain dreams; however, the leader had taken a hunting party out for a few days to kill game for the clan and the Shaman decided to defy his leader.

The children’s eyes were wide and transfixed on the Shaman as he described having two very hard, black, sticks held high and crossed over his head in his dream, sticks that made a sharp clicking sound as they were rubbed and struck together. The Shaman exhibited great theatrical talent; mesmerizing the children with a description of how the sticks turned bright red with heat, melted, and ran down on the ground to form a huge puddle that was bubbling and smoking. He said big rectangular objects rose up out of the molten, black puddle and moved away on what he tried to describe as wheels, but he had no word for wheels, so he said sleds. Then he described more big objects with broad wings that came up from the big puddle and flew up, up, up in circles way up high into the clouds.

Suddenly, the clan leader sprang from the darkness, screamed at the Shaman, jumped on him beating him violently. The children ran. The leader walked away shaking his head still fuming angrily, leaving the shaman lying motionless and bloody.